‘She rocks like a rock star’: Damn Right…Mia DOES “Rock”! 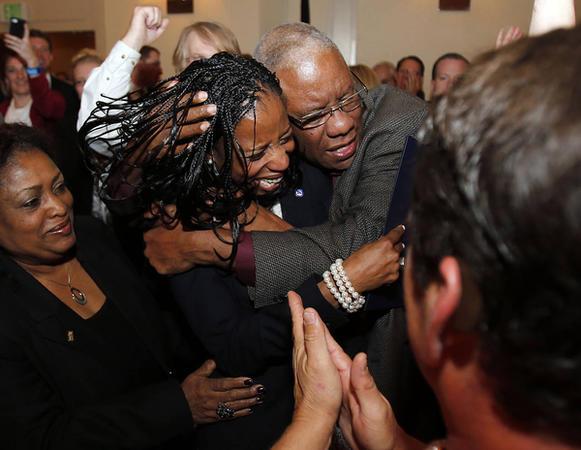 Love, love this pic of @MiaBLove & her father as her victory became apparent. *This* is what tonight looks like!

Posted by JP in Brilliant, Human, Individual on November 19, 2013

The War Against Achievement

A friend recently sent me a link to an inspiring video about an upbeat young black man who was born without arms. It showed him going to work — unlike the record number of people living on government payments for “disabilities” that are far less serious, if not fictitious.

How is this young man getting to work? He gets into his car and drives there — using controls set up so that he can operate the car with his feet.

What kind of work does he do, and how does he do it? He is involved in the design of racing cars. He sits at his computer, looking at the screen, with the keyboard on the floor, where he uses his toes as others use their fingers.

Posted by JP in Brilliant, Individual, Intellect(s) on October 29, 2013

“If we paid every member of Congress a million dollars a year — for an entire century — that would add up to less than the cost of running the Department of Agriculture for one year.”

Many among the intelligentsia prefer to think of special interests as corrupting our dedicated public servants with campaign contributions. But Peter Schweizer’s new book, “Extortion,” shows what happens as the extorting of tribute by politicians in a position to do a lot of harm to businesses that do not pay them protection money.

Campaign contributions are just one of the things that can be extorted. The number of spouses, children or other relatives or favorites of Congressional incumbents who get high-paying jobs in private businesses regulated by government can hardly be coincidental.

When Al Gore was Vice President during the Clinton administration, he simply phoned various special interests and told them how much he wanted them to contribute.

He did not have to spell out the reasons why they should — or why they had better. They already knew from experience how the game is played.

If we are serious about countering this and other political games, at the country’s expense in both money and confidence in our government, we have to oppose the creation of a permanent class of long-serving politicians in Washington.

Read the rest of the article here.