So says the billionaire asshat, that brought the world microshit with..

Bill Gates Predicts Ebola Could Be ‘Under Control’ in 6 Months

West Africa’s Ebola crisis could be “under control” in six months,[Full Story] |

Umm, we know where obama lives in D.C., where do you live holder? Got someone in Dallas, that the two of you should meet..

Live video: The Center for Disease Control will host a media briefing on confirming 1st Ebola case diagnosed in US – @NBCNews
see original on nbcnews.com

And the reason IS (IS), obama lacks “intelligence”!

Have yet to view any statements made by obama or holder..

..concerning the serious injuries of a woman OR the beheading of a woman in Oklahoma. Why is that obama and holder? Could it be that the vile person that did so is, is black? I’m surprised that obama and/or holder haven’t flied charges against the hero that ended the atrocity in Moore Oklahoma.

Yet BOTH obama and holder by their words and actions, want to pursue the cute little beast, michael brown, shown pushing and threatening a much smaller person in Ferguson, MO. Could that be, that, that vile assailant, now DEAD is black?

Have either obama or holder mentioned the fact that the BEHEADER is islamic? OR in fact a NEW BLACK candidate has threatened BEHEADING is also fond of islam. Oh Wait! obama mentioned something on the order of ‘that isn’t islam’. Really, obama?

Gosh Barry, Another “If I Had A Son” Moment, Eh..Oh and a special thanks to MY Uncle, Eric..

FBI OFFICIALS ARE investigating a beheading at an Oklahoma food distribution center after co-workers said suspect Alton Nolen, above, tried to convert them to Islam after his recent conversion.

You know, maybe this vile islamist really IS, ‘The Son of barry’..

It’s a statement. It’s a promise.

Posted by JP in Uncategorized on September 23, 2014

And it belongs in the next speech given by Tony Abbott, Barack Obama, and David Cameron. 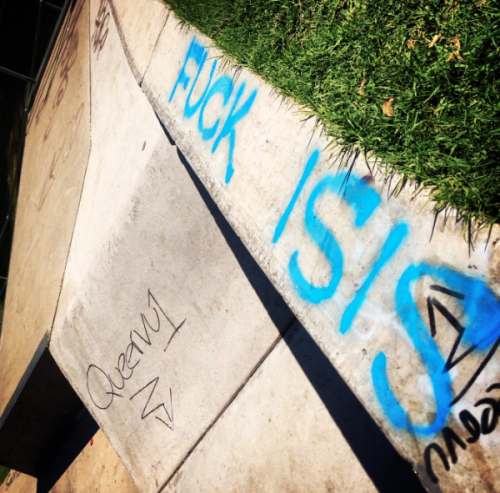