Archive for category The Clinton’s

Forget, Bill. Concentrate on the wonder boy of STILL dubious birth areas of the world.. 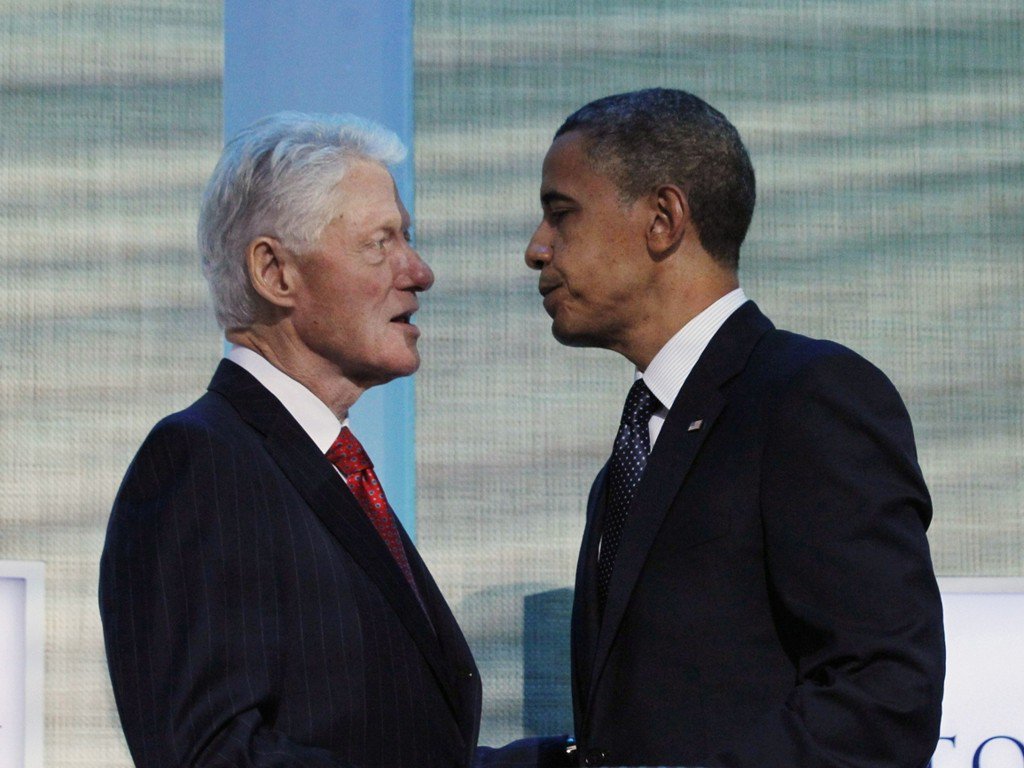 Concentrate on his ever present, when confronted, PURSED LIPS. Regardless as to his pose in this picture, stems from outright arrogance OR, ‘Isa’ Black Boy talkin’ at a White Boy!

The “LEGACY” IS and WILL be OR SHOULD BE, a WORLD RENOWNED failed individual, FOREVER in the books of history.

The New York Times takes down the Clinton Foundation.  This could be devastating for Bill and Hillary Tim Stanley / blogs.telegraph.co.uk:

When the New York Times “takes down the Clinton Foundation”, it sure does SMELL that an ulterior motive is about to show itself. Americans and the world have known about dubious reputations of Bill and Hillary for quite some time. The smell comes from the relationship of a left wing publication (NYT) and this present underhanded left wing administration.

The Times you see, greatly assisted the nomination of Obama in the smearing and downfall of the Hillary campaign for the nomination of President with its idolatry of Americas first “post racial” candidate, Barack Hussein Obama. So much for THAT theory!

Both Hillary, Obama and the Cult of Alinsky were and ARE students of Saul Alinsky, Obama was and is the superior student:

“Obama learned his lesson well. I am proud to see that my father’s model for organizing is being applied successfully beyond local community organizing to affect the Democratic campaign in 2008. It is a fine tribute to Saul Alinsky as we approach his 100th birthday.” –Letter from L. DAVID ALINSKY, son of Neo-Marxist Saul Alinsky

Obama helped fund ‘Alinsky Academy’: “The Woods Fund, a nonprofit on which Obama served as paid director from 1999 to December 2002, provided startup funding and later capital to the Midwest Academy…. Obama sat on the Woods Fund board alongside William Ayers, founder of the Weather Underground domestic terrorist organization.…  ‘Midwest describes itself as ‘one of the nation’s oldest and best-known schools for community organizations, citizen organizations and individuals committed to progressive social change.’… Midwest teaches Alinsky tactics of community organizing.”

Could it be ONCE AGAIN that the NYT and its fondness for and of Barack Hussein Obama, is out to destroy Hillary in her second attempt of the nomination of Hillary Clinton for President of the United States of America ?

You ask, ‘well who/whom would that leave’ ? Try a fellow that supposedly taught Constitutional Law, AND by edict would, as has been proven in his past to, TRASH the TWO TERM LIMIT !

Up to you Billy, don’t agree with Hillary’s thinking but in this case YOU Bill Clinton can be a MAN, or a MOUSE, pick one!

With tensions between President Obama and the Clintons at a new low, former President Bill Clinton is moving fast to develop a contingency plan for how his wife, Secretary of State Hillary Clinton.

Is Monica coming, umm, going with you, billy?

Clinton Let Bin Laden Slip Away and Metastasize. Sudan offered up the terrorist and data on his network. The then-president and his advisors didn’t respond.

Bill Clinton denies it now, but he once admitted he passed up an opportunity to extradite Osama bin Laden.  [You can listen to the tape yourself] — Click Here

In the audio above, Hillary can be heard. Of course she backs Billy up.

MSNBC: David Brock, in his 1996 biography, “The Seduction of Hillary Rodham,” called her “Alinsky’s daughter.”